Our Chief Executive saw a tweet from @cisweb – Children In Scotland – about their proposed study visit to Helsinki in April. Finland is often held up to be a country that Scotland aspires to. We already share some features: a similar population – 5.5million – and a challenging geography – it is the most sparsely populated country in the EU. But there are significant differences too; particularly in how they administer justice. Part of CJS’s role is to learn from best practice wherever it occurs, so we decided to find out more.

Along with around 30 people from a range of public and third sector organisations from across Scotland, Keith, head of improvement and I visited Helsinki in late April. We took part in a well-organised week of fact-finding and face-to-face meetings with a diverse range of organisations, governmental and third sector. 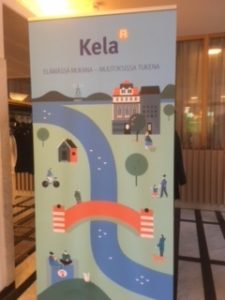 The programme was tailored to the needs of the delegates, who all have a professional interest in early intervention and prevention. It also gave us some time to arrange our own meetings on topics of specific interest. In our case we contacted RISE, part of the Ministry of Justice which deals with community sanctions and KELA, the state welfare body overseeing the universal basic income experiment.. Colleagues at RISE and KELA were generous both in the time they spent with us and their hospitality. If we weren’t already aware of Finland’s excellent education system, it immediately became apparent to us – all emails prior to our visit as well as the meetings themselves were held in English.

On day one of the trip, we were given an overview of the Finnish education system at the Ministry of Education and Culture. It highlighted some key features: paid maternity/paternity leave until a child is aged 3; instruction in a child’s mother tongue as well as in the 3 Finnish national languages; free access to early childhood education and care (0-5); pre-primary education (age 6) and basic education (age 7-16 in the same school to avoid a difficult transition). At age 17 students have a choice of either general upper secondary or vocational education and training. The focus is on ‘lifelong learning and no dead ends’.

Appropriately enough there was ample opportunity on the trip for the teachers attending to witness the education system in action. Strikingly, despite potentially even worse weather than Scotland, a lot of time is given to outdoor play – including venturing into neighbouring forests! When conditions are really bad the ‘Schools on the Move’ programme promotes indoor activities, including using corridors for ball games. Risk certainly doesn’t seem to feature as highly in their thinking as it does in ours! Some schools also had mini-zoos and large greenhouses to make education as hands-on as possible.

In addition to its internationally acclaimed educational attainment, Finland has a justice system focused on mediation and community sanctions; innovative social welfare experiments in areas such as universal basic income (UBI); as well as a thriving third sector engaged in the delivery of front line services.

We were particularly interested that Finland imprisons far fewer people than we do in Scotland, with fewer numbers coming into the justice system at all. The investment in early years, support for parents and families and holistic mediation services is obviously paying longer-term dividends. Even for those who do come into contact with the justice system, RISE has a stated aim of increasing the use of community sanctions . Currently around 50% of all cases they deal with are given community sanctions. Not only does RISE believe that this delivers better outcomes for the people involved and reduces reoffending, but it also costs the State much less. The average cost of a community sanction is calculated 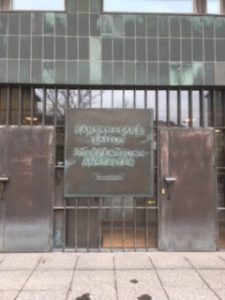 by RISE to be 15 euros per day; the average cost of a prison sentence is 170 euros a day.

The third sector in Finland is funded in a potentially controversial way; through the profits generated by gambling, which is entirely State-controlled. Always trying to find similarities with our own system, we decided that the nearest equivalent was the National Lottery. The irony of addiction services being funded by gambling money was highlighted by one of the probation officers (social workers) that we met. She mentioned that there was a gambling addictions office just a few floors above the local community sanctions office we visited. In any case it was a bit of an eye-opener to see rows of one-armed bandits and slot machines directly beside the check-outs in some of the larger supermarkets in the town. But then again, where do you buy your Lotto ticket?

The importance of working with the third sector was stressed by both the Ministry of Justice and the Ministry of Education & Culture. Relationships generally seemed good and there is a recognition that people often prefer to engage with non-governmental agencies. A striking example was the Helsinki Mission where they work to tackle poverty and isolation within society, including running hard-hitting campaigns encouraging kindness and active citizenship.

Albert’s Living Room is a meeting place for seniors and families with children and it aims to tackle social isolation of new parents and seniors. Open daily from 9.30am – 2.00pm and based on the simple premise that there are ‘never enough laps for babies’, it has trained 73 senior volunteers to work with new parents and children and has over 5000 visits a year.

The country also invests in innovative mediation services. We were so impressed by the work of the Mediation Office, which offers an impartial and free of charge mediation service wherever both parties of a dispute voluntarily seek it, catering for around 47000 people a year nationwide. Cases can be submitted by the police or the parties concerned and the mediation process is based on a restorative justice approach. 90% of those who engage in the process reach an agreement – usually an apology and/or monetary compensation and often this means no further legal action is required. 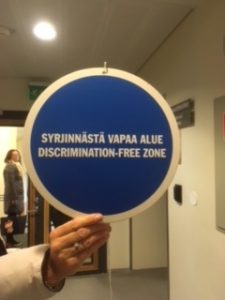 face the consequences of their actions by agreeing to sanctions with the victim. It also provides a drop-in centre in the city for young people to do their homework after school or simply to ‘hang out’. It has few rules other than be polite (they actively encourage the youngsters to say please and thank you to each other) and not to shout – recognising that many of the attendees have experienced trauma. Young people who come in under the influence of drugs or alcohol or upset in any way are encouraged to talk in confidence to the qualified staff and aren’t turned away, as may happen in other settings.

Aseman Lapset has proven really successful at diverting young people from hanging around the main railway station which had been one of their previous haunts, hence the name. The cold weather makes it difficult for them to congregate outside during winter months and lack of money means that for many alternative pursuits, such as sports or cinema outings, are not an option. It has had a particularly beneficial effect on a large shopping centre nearby, as having hundreds of young people milling around after school or at weekends was putting off shoppers from visiting it. So impressed with the initiative, the chief executive of that shopping centre is now the Chair of Aseman Lapset’s Board, She is a strong advocate of diversion work with young people promoting the social and economic benefits for the wider community.

A slight cloud was hanging over Aseman Lapset at the time of our visit as their central Helsinki location also has prime development potential. They are seeking another suitable venue within the city centre – location is everything. We wish them well.

The visit was an opportunity to witness first hand some of the services that makes Finland a by-word for progressive social initiatives and to reflect with the other Scottish delegates what we could learn from and adapt for back home. It also allowed us to reflect on the many good things that happen in Scotland and the importance of not only learning from good practice, but promoting our own. We must learn from others, always, but perhaps we should also learn to shout louder about our own successes too.