We are thrilled to announce our FREE online annual event ‘Social Justice in a Brave New World‘. Join us (virtually) on 11 March 2021 as we bring together two experts in social health and justice to discuss – what’s next? 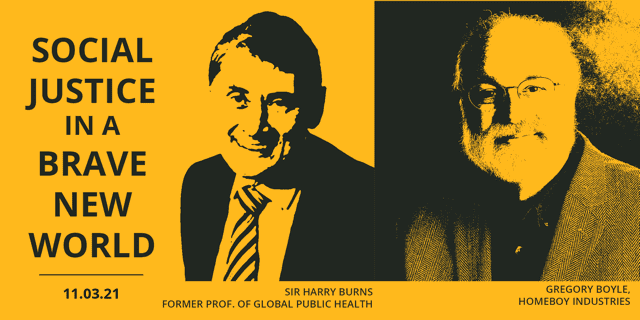 Over the past year, the world has changed.

However instead of acting as an equaliser, an experience we all shared, COVID-19 has underlined the inequalities in society.

Now that we can start to see the light at the end of the tunnel, it’s time to regroup.

Join us as Sir Harry Burns, former Professor of Global Public Health and Gregory Boyle, Founder of Homeboy Industries talk to Writer, Performer and Broadcaster Byron Vincent about how we make sure we don’t lose the opportunity this moment presents for Scotland (and the world).

– How do we push past pandemic fatigue to rise to the challenges ahead?

– What practical steps do we need to take to improve social justice in Scotland?

– How do we use this moment of transition to work for a better justice system?

BOOK YOUR PLACE VIA EVENTBRITE

Zoom details will be sent before the webinar.

Byron Vincent is a neuro-diverse writer, performer, broadcaster and activist with a long and varied career. Byron is a passionate social activist with lived experience of issues around poverty and mental health. He has written and presented many documentaries for BBC Radio 4, often exploring the social problems arising out of poverty, ghettoization and mental ill health. These include ‘**** Is Other People’ a self-help guide to social anxiety, ‘How To Turn Your Life Around’ and ‘The Glasgow Boys: From Chaos To Calm’ for BBC Radio Four. Byron is a proud ambassador for mental health charity Rethink, an organisation that tackles stigma around issues of mental health.

Father Boyle witnessed the devastating impact of gang violence on his Los Angeles community during the so-called “decade of death” that peaked at 1,000 gang-related killings in 1992. In 1988, he and parish and community members, started what would eventually become Homeboy Industries, which employs and trains former gang members in a range of social enterprises, as well as provides critical services to thousands of men and women who walk through its doors every year seeking a better life.

In 2014, President Obama named Father Boyle a Champion of Change. Currently, he serves as a committee member of California Governor Gavin Newsom’s Economic and Job Recovery Task Force as a response to COVID-19.

Sir Harry Burns graduated in medicine from Glasgow University in 1974. He worked at the Royal Infirmary, Glasgow where he was appointed Consultant Surgeon in 1984 and Medical Director in 1990. The experience of working with patients in the east end of Glasgow began his lifelong interest in the complex inter-relationships between social and economic status and illness. He was Knighted in 2011. In 2014, he became Professor of Global Public Health at Strathclyde University.