If you were at the Citizens Theatre on Friday 9 March, you might have been a bit startled when you were handed a program with this emblazoned across the front. Especially as what you were attending was organised by Community Justice Scotland. 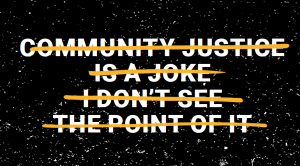 So how did we get here? Six months or so ago, the team began discussing and debating what our big day should look like.

We wanted to inspire and challenge our audience – and we weren’t inspired by any of these, so why would they be? We wanted to create something different – something unexpected. We were sure about three things. We needed incredible speakers, an inclusive audience and for the possibility of change to radiate throughout. And so, ‘Rewriting Scotland’s Story’ was born.

Byron Vincent, our host for the day, set the tone. He walked out onto the stage and told the packed theatre he was nervous. That he suffered from social anxiety. That his past had been chaotic, full of violence and addiction. And here he was; performing, making us laugh, engaging everyone in the room. ‘Write your own story’ he urged us ‘and make it a big, happy, clever middle finger to all those stereotypes’ and we were off.

Our first speaker was activist Roza Salih, one of the ‘wee lassies’ who campaigned to end the detention of child asylum seekers. When her friend, Agnesa, was detained in a dawn raid, Roza and the rest of the ‘Glasgow Girls’ got mad and got organised (it doesn’t have to be either/or). Still at school – only 15 years old – Roza engaged with politicians, the press and the public and ultimately saved her friend. But she didn’t stop there: ‘there is still suffering so, I am still campaigning’. When asked by Byron what drove her, at such a young age, to battle for Agnesa, ‘anger’ she responded ‘ and love’.

Next up was Dr Mary Hepburn, an obstetrician, gynaecologist and Scotland’s leading specialist in alcohol and drugs use in pregnancy. She established, and led for more than 25 years, a city-wide multidisciplinary reproductive health service for women with social problems; ‘services considered useful needed to be brought together in one local place’. Plus ça change. When questions were taken from the audience, a woman who was supported in pregnancy 20 years

ago by Mary, spoke of how she had rewritten her story – she’s now a mentor to others who need support.

After a lunch provided by Street and Arrow, a social enterprise which hires people who’ve offended, pairing them with a mentor who supports with employment skills, debt management and relationship issues, we returned to our third speaker of the day: Professor Sir Harry Burns.

He began by telling the room he was fed up. Fed up with the lack of progress on problems that we all know about. ‘The problem is we do things to people not with people’. He urged us to disrupt, take risks and innovate ‘we can make change happen by breaking the rules’. He finished off: ‘what I’d like to see is not just a safer Scotland, I’d like to see a flourishing Scotland, where we support every citizen to realise their full potential’.

Darren McGarvey, rapper and author of Poverty Safari, followed Sir Harry Burns and echoed the same themes, issues and demands (albeit with a bit more rhythm and rhyme). Inequality, personal

responsibility and experience, change, anger and love. His rendition of ‘Jump’ was electrifying: ‘and if I fall, I know you’re going to stop what you’re doing just to help me up. That’s real love.’ There’s a real spark between Darren and Byron, so the planned Q&A with the audience is abandoned as they continue their conversation – demonstrating the importance of relationships, emphatically.

Professor Jason Leitch is our final speaker. He tells us about change, what that means and how it happens – and when it doesn’t. He has the crowd in stiches as he describes his story from dentist to surgeon to faceless bureaucrat to the Citizens stage. He tells us: ‘don’t write lots of letters and reports or set-up short-life working groups – instead give the power away to actual people who use the services, change the dynamic’. His example of the parenting group in HMP Shotts which helps dads and granddads stay connected – as well as reduce the likelihood of offending – is incredibly powerful and stuns the audience.

Then, the lights are dimmed and the theatre is dark. A single spotlight illuminates the stage,

‘I stand in a toilet staring at myself in the mirror as I try to insert a needle into my jugular vein’.

A voice in the darkness begins to tell his story – a story of violence, addiction, pain, anger and then change, love, and purpose. ‘I stand here in the dark, however I shine’. The spotlight moves, and another story begins. He tells us about his experience of a terrible violent attack, the fear and trauma that followed, the inhumanity of the justice process, but also of help, support and triumph: ‘crime isn’t black and white…we’re all capable of making mistakes and we’re also all vulnerable to being a victim’. The final story begins, ‘I look at how my life was 5 years ago and I don’t even recognise the person I used to be’. She tells her story of chaos, exclusion, of battles fought, of doors slammed, opportunities lost and won. ‘I just want to be like you. I just want to go to work. Pay my bills. Pay my taxes. Eat well. Be healthy’. 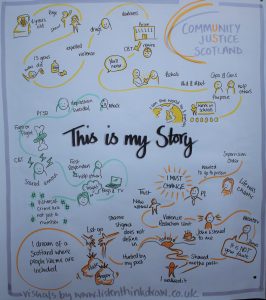 She ends on a challenge:

Her final words may have been hard to listen to, inviting us to take a closer and more honest look at our preconceptions, beliefs and actions, but there could be no more fitting end to our inspiring, thought-provoking day. We have to speak the uncomfortable truths if we are to move forward.

This is just the beginning – our future is as yet unwritten but by listening, learning and doing we can build a smart justice system which serves every person in Scotland.