In March 2013, I was sentenced to a two-year supervision order (probation) and a deferred sentence for two years. It was the beginning of my journey into the person and, more importantly for my wee boy’s development, the mother I am now. I look at how my life was four years ago and I don’t even recognise the person I used to be. I was expecting a custodial sentence, I prayed and prayed that I would be sent to prison, I really thought that prison was my only option at the time to escape all my problems. I was in a toxic relationship; my life was chaotic. I know now if I had gone to prison I would not be sitting here today. 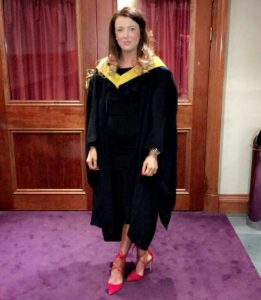 It took me a couple of months after receiving my supervision to finally give in to the changes I desperately had to make. I didn’t connect with my first worker – I often felt she was trying to tell me how I was feeling or treating me like a case study. I ended up with a new worker and that’s when things really started to get better. I felt like I mattered, I felt heard for the first time in my life. She didn’t judge me, she didn’t force me to talk she just spoke to me like a person. She understood how hard it was for me.

I felt really isolated because I had to cut myself off from all my friends. I had locked myself away in the house for months whilst I did the supervision work. The first block of supervision was understanding my emotions and how my emotions affected other people. I did cognitive behaviour therapy and anger management where I worked on assertiveness. I looked at my offending and I learned something new about myself every day.

After about 8 months of supervision I was feeling positive about life, but I felt that supervision wasn’t enough for me. It was then I sought out other support. I attended a woman’s hub in my area for a while. It was good as it got me out the house and from there I started a community learning course.

I engaged with the Violence Reduction Unit and I got a mentor. He was also someone with lived experience. He got me and he understood me more than anyone I had spoken to before. My mentor helped me address underlying issues I had from my childhood and helped me to love myself and believe that I was worthy of the second chance I had. The support from him was enormous in my journey of change. Support that, if I need it to this day, is still there. He is there when I need him and, more importantly, I gained a great friend.

After two years on supervision I completed my order and since then I have achieved more than I ever thought I could. In 2016 I graduated with an HNC in working with communities and I have successfully gained employment as a young person’s project worker.

With the reconviction rate now at an 18 year low and Scottish Government’s plans to keep people out of prison and reduce re-offending further, the public need to accept the evidence that community sentencing works. I realise that there are not enough “success stories” going about and that this means some people are unaware how important it is to include, and not further exclude, those who have committed offences.

When I read about ‘soft touch Scotland’ it makes me feel like I will never be allowed to leave my mistakes in the past. That despite being a mother, a student and youth worker, that I will also be ‘an offender’ first.

I am all for backing the Government’s plans; things do need to change. People need to understand that community sentencing is about making things better – not only those who have offended, but for all of us. Most of those serving repeated short term sentences are people that, with the right support and opportunities, can not only break the cycle of offending and put the brakes on the revolving door but also go on to contribute to society too. Which means that not only do they succeed in life but their children will too. I know because I have lived it and I have turned my life around – and it all began with a community sentence.

I completed my sentence and I now have something to offer society. I believe I am a great example because I know that if we don’t throw people away, but create opportunities for them, they can change too. Before receiving a community order, I was stuck. All I needed was a support network and time to heal wounds from my Adverse Childhood Experiences. I needed guidance and role models and I would have never found any of this support if not for being sentenced to a supervision order.

I have been able to address my offending behaviour and I have not committed another offence. I have a happy wee boy who is doing amazing in school and life. I broke the cycle I was born into. And If I can turn my life around then so can anyone. We all deserve the chance to change, is that not what the whole point of rehabilitation is?

Since I finished college and got a job I feel proud, I feel confident, I feel like a person, a proper person. I feel part of my community and I feel like I belong. I am worthy, I am important and I have the right to live a life free of labels, stigma and shame. I had the opportunity to change my life around, I did my sentence in the community and I’ve never looked back. None of it would have happened if I had been sent to prison.

That community order saved my life and gave me the chance to make life good for my wee boy.