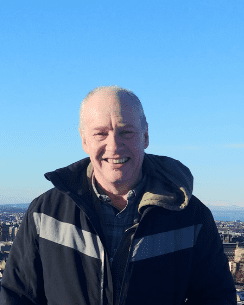 Rory is the National Coordinator for the Caledonian System. The Caledonian consists of a court mandated men’s behaviour change programme with integrated women’s and children’s services and has twice been accredited by the Scottish Advisory Panel for Offender Rehabilitation for use across Scotland. It is currently implemented in 19 out of 32 local authorities covering 75% of the Scottish population. Rory’s role is to oversee the system and also to work towards the expansion of positive work with men who are domestically abusive.

Rory’s background is in justice social work. He has a BA in Politics and a Masters degree in Social Work. Starting in 1991 he worked in the Domestic Violence Probation Project in Edinburgh, a court mandated service for men convicted of domestic violence offences where he was a team manager co-developer of the men’s programme. He also managed the Safer Families Edinburgh Project which offers various non court mandated services to agencies and to families affected by domestic abuse. Rory was one of the authors of the original practice manuals for the Caledonian system published in 2009 and oversaw the rewriting of these manuals in 2017.

In 1998 Rory spent six months working in a community health project in Melbourne Australia, in a non court mandated programme for abusing men as part of a multi-agency response to domestic abuse.

Rory joined Community Justice Scotland in 2020 when the Caledonian Central team was established.