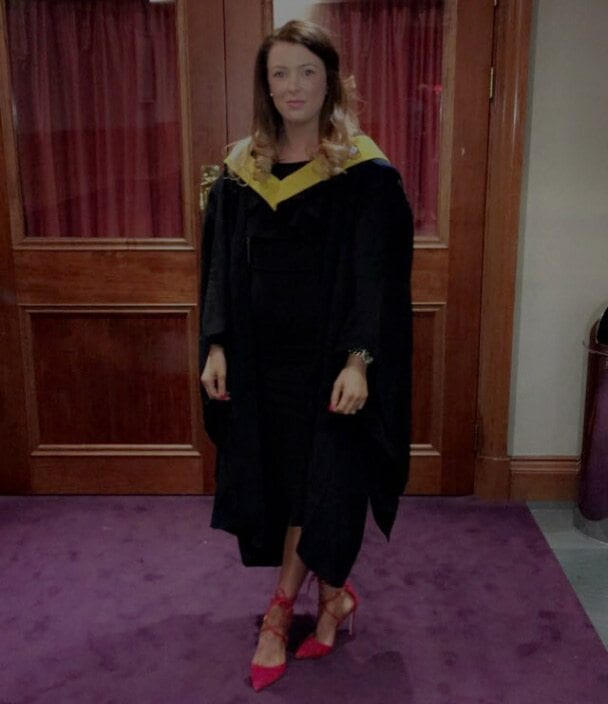 “My mum had a lot of mental health issues, my dad was in the army so he wasn’t there much” says Kim, a successful youth support worker in her 30s and a far cry from “the messed up wee lassie who did something I’ll always regret.”

Like many of the young people Kim helps these days, she had a tough start in life.

Kim, her older sister and younger brother found themselves alone a lot and had to look out for each other. By the age of 8 she was regularly in and out of respite as her mother struggled to cope.

By the time Kim was 14, the family had completely broken down. When she found her mother unconscious at home having taken a drugs overdose, Kim went “off the rails”.

She began sofa surfing at friends’ houses. At weekends she’d be picked up two or three times by the Police.

I’d be really drunk and sleeping in people’s gardens. I just didn’t want to stay at my mum’s after she’d taken the overdose and I’d had to resuscitate her.

Kim fell in with an older group of friends. “It was chaotic. I just went from one bad, violent relationship to another. I was in and out of trouble all the time.”

At 17, Kim was convicted of a racial assault. It’s a crime she is horrified by to this day – and it’s had a profound impact on the shape of her life.

“I did something I regret under the influence of alcohol and it had an impact on me for the last 14 years,” she says. “When I look back it’s still raw and emotional. People are still judging me on something that happened when I was a stupid teenager. I’ve done everything in my power to turn my life around.”

While Kim’s son, born when she was 23, has been the major motivation she needed to change her life, she’s grateful to the many people who have helped.

I feel really lucky that there were people who were willing to give me a second, third, fourth, fifth chance if I needed it.

Yet for Kim, that help was slow in coming. Her turbulent teenage years stretched into her 20s. She fell in and out of trouble and she was trapped in a violent relationship.

“It wasn’t until I was 25 that I got help,” she says. “I’d been quite stable for the first year of my wee boy’s life but then my cousin passed away and I went off the rails again – mostly at the weekends when my son was staying away.”

Further trouble with the law brought a 2 year supervision order. She initially wished for a jail sentence: “In my head I saw jail as the answer. My wee boy would be looked after by his Gran and I could go into jail and sort my head out and get away from the relationship I was in.”

Stranded in the frustrating mess that her life had become, she tried to breach her supervision order in a bid to get into jail.

She went to the probation service and asked for help. After some false starts, she found people she could trust and started to tackle her anger management issues. Cognitive behaviour therapy helped her address the underlying trauma from her childhood. She progressed to community learning but still found the help she needed hard to come by.

She started looking into other services for ex-offenders but drew a blank. She set her heart on going to college but got knocked back because of the racial abuse conviction. “My social worker told me not to give up and she introduced me to the Violence Reduction Unit.”

As soon as he walked through those gates I knew I had to deal with the supervision order. It was probably the last chance I had to stop him from getting messed up as well.

This introduction was a turning point. A mentor with his own lived experience took her on and inspired her. She was introduced to Positive Prisons, a community for people who have convictions – “It was good to be with people who were in the same boat as me”.

After mentor training with Positive Prisons, she began working with a local women’s group. But she was still dealing with her own issues and trying hard to get into college to study an HNC in Working with Communities. It took two years of determination and graft to get into college but even then, her past came back to haunt her.

I had to keep going for my son. Every time I looked at him I knew I couldn’t give up. I went hungry at times while volunteering because I needed the references. Four months into college I was in a class learning about anti-discriminatory practice and prejudice when I got pulled out of the class and taken into a room where there were two people sitting. They told me I was too high risk to go on a placement.

Kim kept calm. She knew she wasn’t barred from working with young people and already had a placement set up through her contacts at the VRU. But the college stood firm and refused to allow her to take up the post. They also suggested she quit college, because without their permission to go on a placement, she wouldn’t be able to pass the course.

She asked to speak to the college principal. He declined. She asked for the college policy on ex-offenders. She’s still waiting for that. She started a petition. “I’d worked too hard to get into that place and within a couple of hours of starting the petition I had hundreds of signatures.”

Her story was covered in the press and was all over Twitter. Finally, the Principal agreed to a meeting and she was allowed to continue her course – albeit with minimal support.

Graduating to a new world

In the past few years, Karyn McCluskey, Chief Executive of Community Justice Scotland has asked Kim on many occasions to describe her definition of success. Initially stumped, she wondered why Karyn kept asking. But after thinking long and hard about it, on a public platform at an event in Edinburgh, she shared a very personal glimpse of the strong young woman she has become.

Success to me means being able to look in the mirror every morning and like what I see, knowing I’m not perfect but I’m me, I’m alright. Since I finished college and got a job I feel proud, I feel confident, I feel like a person, a proper person. I feel part of my community and I feel like I belong. Success is me knowing that I am worthy, I am important and I have the right to live a life free of labels, stigma and shame.

Through determination, Kim took responsibility for her own destiny. “There comes a point in your life when you have to take ownership. I made bad choices in the past but everything I’ve done in the last few years has been to improve myself. I’ve learned from my mistakes and I’ve grown as a person. I’ve done everything I can to make sure that my son doesn’t have the same outcome as me. I’ve done my sentence, I’ve done my probation, I’ve paid my fine. Do I have to keep going back to when I was 17? Everyone has the right to change.”

Moving on in life has meant having to leave things behind. She’s rekindled her relationship with her father but has had to give up on many friends and family members. It isn’t easy, especially when you still live in the same area. But she’s gradually becoming the person she knew she could be – and she’s confident that others can do the same.

“Things are getting better in the criminal justice system and I’m excited to see what’s going to happen with everything that’s taking place. We have to give people opportunities and jobs. We need to give them the chance to change. We can’t just lock people in jail and throw away the key – because everybody matters.”